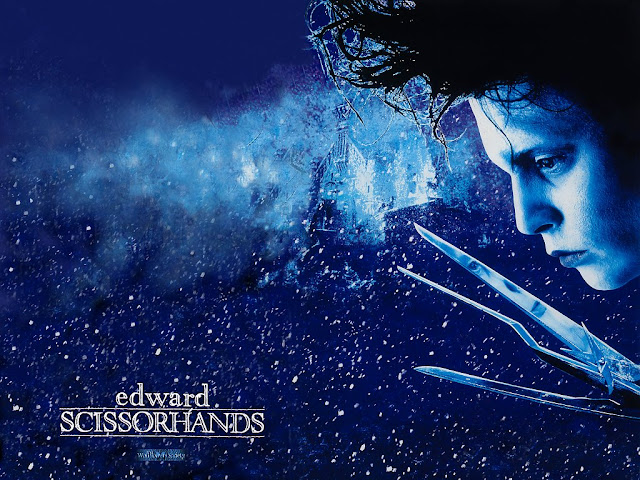 Edward Scissorhands poster art
Edward Scissorhands is perhaps the film that has defined the career of director Tim Burton as well as acting as the catalyst that shot Johnny Depp into the stratosphere as a mainstream actor and household name. With the rise of films rife with violence, sex and one dimensional action heroes that plagued cinemas in the early 90's Edward Scissorhands was a breath of fresh air for movie goers. Although the movie essentially follows the classic Belle et la Béte fairy tale plot in which an outsider falls in love with the stereotypical beautiful female lead, the production and character design make Edward Scissorhands completely unique and an absolute joy to watch. 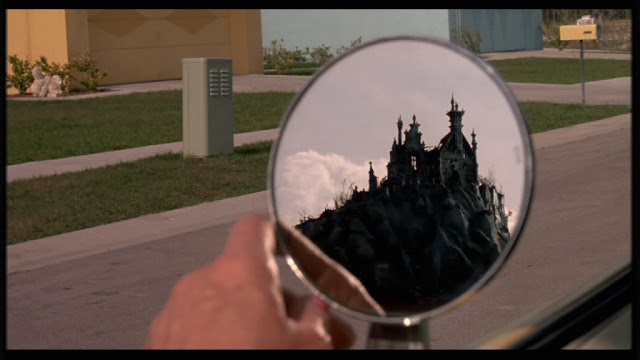 Edward played by rising star Johnny Depp is a synthetic human, created by an old and eccentric inventor (Vincent Price). Dwelling in the mysterious but strangely beautiful European gothic castle, the old inventor creates a man to alleviate his loneliness, Edward whom remains incomplete at the time of the inventors death leaving him a prisoner in his own body as well as a prisoner in the dilapidated castle. The hands are the tools used to feel, to express, to hold a loved one. Without this dexterity the world can be a lonely place which is made apparent by Edward's predicament, having large intimidating blades for hands. He is discovered some years later by Peg Boggs (Diane Wiest) an avon caller whom takes pity on the man with scissors for hands, taking him to live in the quaint suburban town she calls home. With no previous interaction with human beings Edward has a child like innocence which contrasts with his rough exterior."Edward stands apart from Tim Burtons other films because Edward is the sweetest, most innocent soul." (Biodrowski:2000). In a town where appearance is everything and beauty really is skin deep the town soon turn against the artificial Edward, assembling a Frankenstein style lynch mob forcing him back into the haunt from which he came. "It ends up being a melancholy tale that critiques human nature and conformity." (Schwartz: 2008) 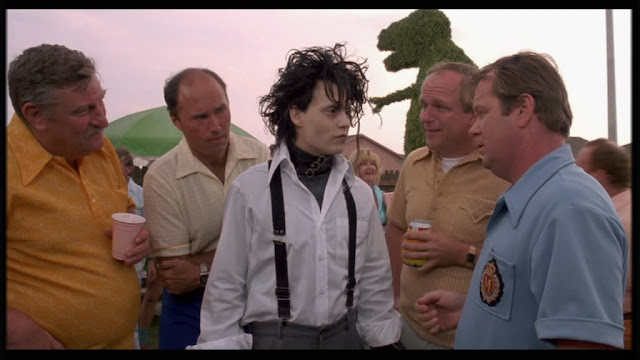 The German Expressionistic element of this film is apparent in the use of colour. The blackness of the castle    along with its inhabitant Edward is taken from the 1920's classic 'The Cabinet of Dr Caligari'. Another comparison that could be made between these two films is the emphasis on everything being slanted and unsymmetrical in the castle from the arched windows to the crumbling attic. This arguably expresses peculiarity and disarray as the supposed perfect suburban town below is all completely symmetrical, block buildings that mirror each other. Depp also used an overly expressive style of acting to play the role of Edward similar to that of a silent film where there was no dialogue as a means to express the character. "He gives a silent-movie performance, relying on his movements to communicate everything that is needed." (Larsen:2008). This is perhaps due to Edward only uttering a few words throughout the film and his apparent awkward interaction with other people..
The use of pastel colours in the town could possibly represent consumer marketing in America whereby all the interior flaws are masked by exterior beauty. There are many skeletons in many closets among the locals which are all masked by bright colours and civilised gatherings. From the adulterous vixen neighbour to the abusive boyfriend of Kim (Wynona Ryder) the audience find that the synthetic Edward is infact more human than the town's folk and clearly made a spectacle as a means of cheap entertainment and to benefit the town's own existence. During the final climactic scene, Kim chases after Edward into the castle wearing a white dress similar to that of a bride at a wedding. They both embrace, standing close to each other in the attic of the gothic castle at the top of the hill which over looks all, the summit of this fairytale world. This could arguably represent a bride and groom atop a wedding cake. 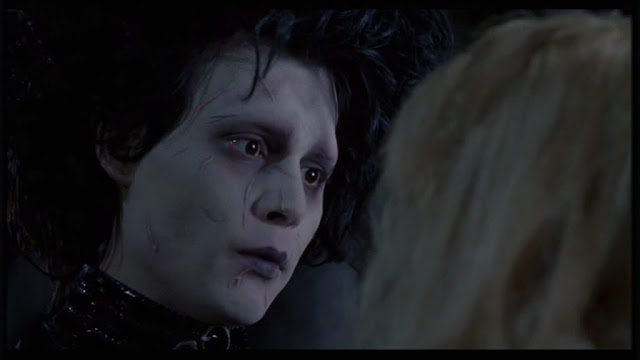 Although some would argue that the novelty has worn off with the recurring gothic fairy tale theme of Tim Burton's work, Edward Scissorhands is arguably one of the most imaginative, unique and thought provoking films of the 90's and will still be enjoyed by children and adults alike for many years to come.


List of Illustrations
Fig 1. The Gothic castle
Fig 2. Edward the spectacle
Fig 3. The final goodbye
http://s23.photobucket.com/albums/b395/JohnnyDeppZone2/screencaps/cap%20edward%20scissorhands/?start=all
Posted by OllieNicholls at 10:54